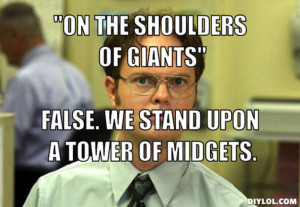 “Nothing original” is a quasi-slogan/battle cry I started using to describe my Evans School redevelopment philosophy. It’s not ironic per se. I feel it’s what an interviewee of Samantha Bee’s described as a double intennuandres.

Part of what I intended was sarcastic because in general, unless absolutely necessary, I didn’t want to use anything new. I wanted to keep as much of the original building as possible.

As important, I wanted to use as much pre-existing knowledge and experience as I could muster and harness. Things like what I’m dreaming about have been done previously; no sense reinventing the wheel. Historically, the beauty of the craft movement has been that such things are shared freely.