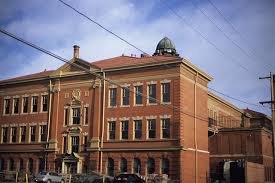 Making the Evans School a Special Place Is the Real Objective

I’ve never wanted to form a completed vision for the school. I just wanted to set a notional trajectory and the let the world watch as a small host of hopefuls set off in that direction. I dreamed of an organic, publicly visible, and inspirational process that created a place in the center of the city capable of nudging society on an improved course, even if ever so slightly.

The Evans School is a beautiful building situated in a tremendous location but making a brewery work there is no cake walk. It’s a big building so one would have to sell a lot beer to justify just one of the building’s three floors. Food carts do not appear to be a viable long-term option, so the additional investment and complexity of a restaurant operation seems necessary. Additionally, The Evans School is a historic building, which means the redevelopment process could involve substantial obstacles. The foundation of my brewery concept is the notion that home brewers and others can help the Evans School get past some of those redevelopment obstacles, and in the process create one of the coolest taprooms ever.