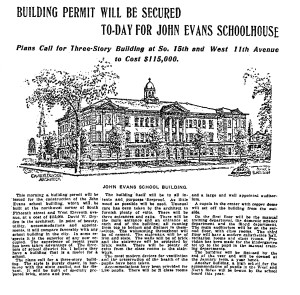 The Evans School does indeed present some formidable obstacles. There is a space utilization problem built into the building’s core. It’s a school that was built even before the halcyon days of Mayor Speer’s City Beautiful campaign. David Dryden, the architect who designed the Evans School, designed a great many other schools in Denver. The Evans School and North High School are among the few remaining pieces of David’s school work.

In 1904, when the Evans School was built, Mr. Dryden was a pioneer. When the notion of fire egress was still novel he built a solid stone school with huge hallways and exceptionally wide stairwells. These halls and stairs are magnificent spaces but in the real estate trade such spaces are referred to as common areas.

As financial constructs, common areas are separated from a something I call “non-rev” by at most two degrees of financial freedom. The short math is you have to get revenue out of the common areas. If you don’t it is effectively a one third increase in rental rates. The price proposition is suboptimal.

I have some ideas on hallway revenue but I definitely haven’t cracked that nut.